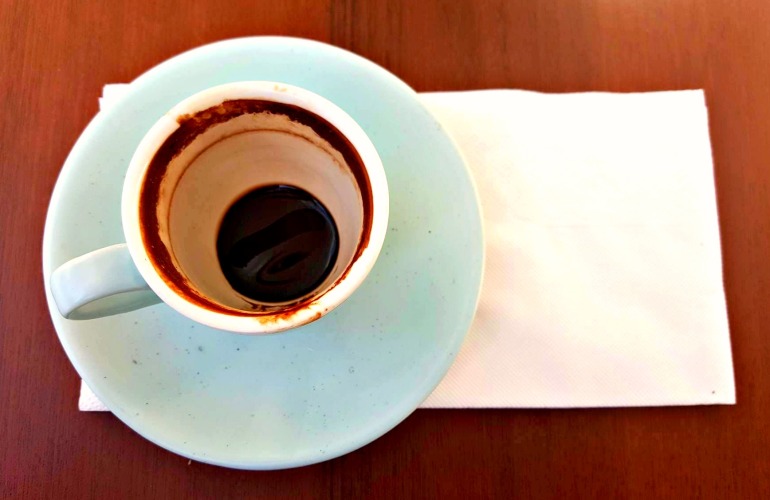 Unlike other posts I have written over the years, this one originated when I stepped into a metal lined elevator, pressed the B button and inhaled the smell of gasoline. What I did next was completely out of character because I swung my leg over the frame of a bicycle, made my way out of the basement of my hotel and into the glorious sunshine of the Gold Coast, Australia.

How I would later come to be found dancing to Zorba The Greek on the main stretch of Kirra Beach after discovering the true meaning of life from a small, delicate cup that contained Yiayia’s wisdom; it all began one morning back in April when I was discovered sitting in my favourite place, penning away titles and page numbers.

I was in the midst of taking a break from what can only be described as my version of hell, otherwise known as Pharmacology, when I heard, “Oh good! You’re awake. I can’t sleep because I’ve been thinking about Pablo’s birthday”.

Looking up from the page that spoke of slowly sauteed onions with a spring of thyme and the marinating juices of olive oil and lemon juice, I raised a brow. Not because I was annoyed at having been disturbed or discovered as everyone knows I can be found at the kitchen table either studying or writing my various posts for Scarlett O’.

No, I raised a brow because my Mother, Lois, was standing on the threshold of the sun-room in her pyjama’s at 3 in the morning with an arm filled with papers, pads and pens. Papers that no doubt had seat charting, designs drawn out before a hazardous and rough line would be precisely angled through the drawings that didn’t cut it for her and a shopping list that would rival any Greek Woman’s.

There both of us were in the early hours of that particular and so many other mornings surrounded by empty coffee cups, bits of paper that lay strewn around with grand designs and multiple shopping lists. Among the bits of paper, empty coffee cups and pens lay our prized possessions of cook books.

“Wow, you seriously cannot ride a bike for sh*t can you?”

The comment was spoken by my sister Kaffy as she came zooming up beside me, with her curly hair bouncing behind her and gloriously tanned legs getting that little bit darker. Glancing over at her while trying to not face plant the ground, I soon discovered a couple of things: I was no longer at The Little White House that saw me riding a bicycle for the first time since February and I was heading straight towards a hot guy running.

As I manipulated the handle bars like a professional while trying to appear like I wasn’t about to have kittens, I hadn’t realised I had become engrossed in reliving countless negotiations that had been undertaken during the planning period. The thought of being a bedazzled negotiator had me in a fit of laughter.

Having finally calmed down from my laughing fit that seemed to draw people’s attention because there just so happened to be a crazy lady whizzing past on a bicycle, I found myself pausing at the base of a steep incline between Kirra and Coolangatta beach to take in the scenary before me.

To say it was simply beautiful and serene wouldn’t be doing it justice.

Leaning against the handle bars and inhaling as deeply as I could without setting off my asthma, I watched as mums with their bubs strolled past and elderly couples who were linked at the hands blend into one another. Before the huffing and puffing sound belonging to joggers could be heard.

Although engrossed with watching the waves, Kaffy, Ms. C and Mr. M rode past me with a quick backwards look thrown over their shoulders and I knew it was time to gather that little bit of extra strength and adrenaline so I could ride up that damned hill. As I awkwardly pushed off with my tip toes since my seat was adjusted for a giant while trying to straighten my balance, I gathered my remaining strength and adrenaline.

Even though my mind was screaming, “Abort mission! I cannot ride up that mountain, you have got to be fucking kidding me!”

Explaining to myself as to why we had to ride and not walk up the hill as this week was about breaking old chains of procrastination and trying new things, I finally made it to the top of that f*cking mountain. With a racing heart threatening to leave my chest while a bead of sweat made its self known as it glided slowly down my back, I discovered FOMO (fear of missing out) wasn’t listed in my vocabulary as Ms. C suggested it was time to brunch.

Much to my and my jello legs’ relief. 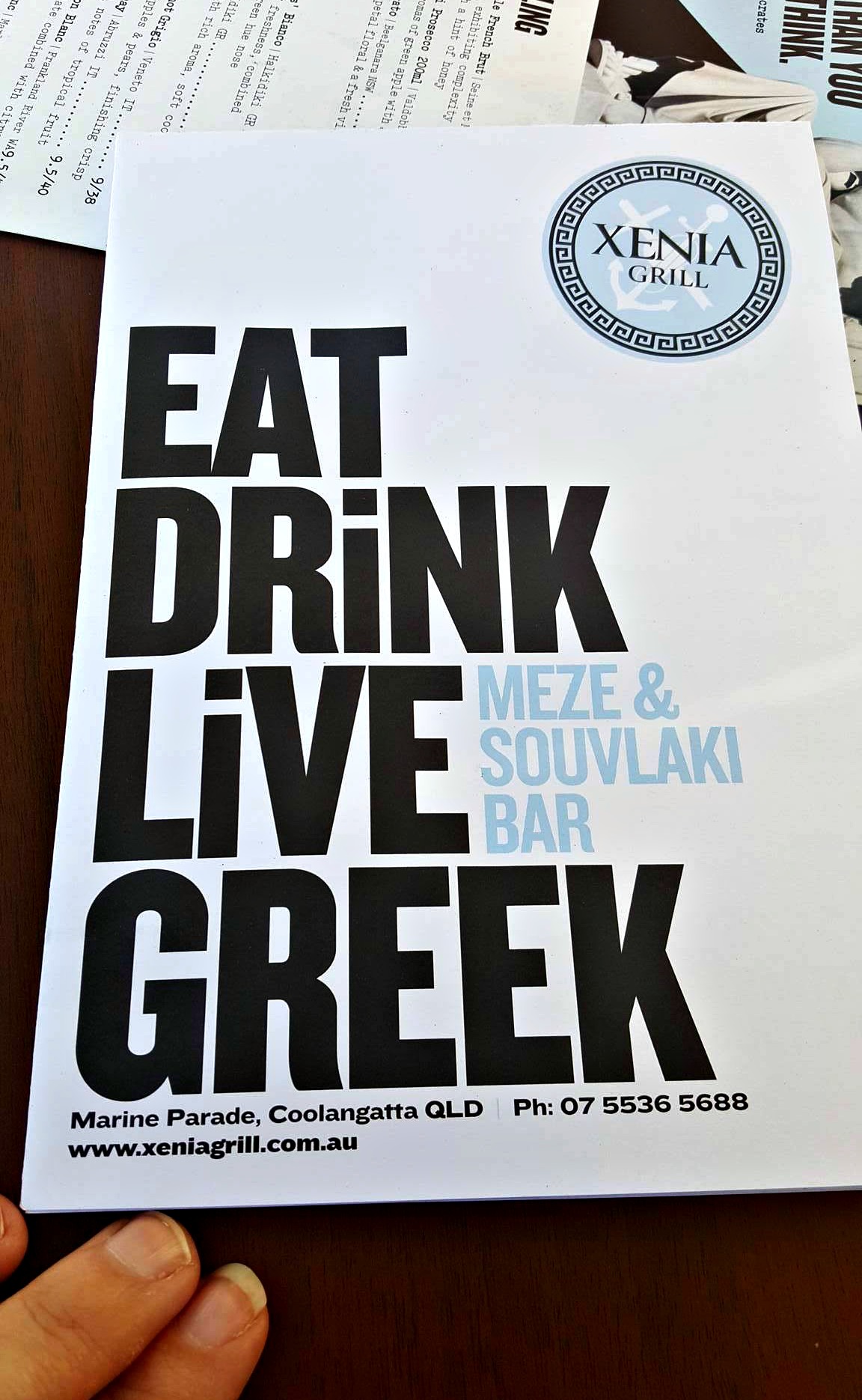 With my heart yearning and my stomach craving Greek food, I trailed behind the others as they checked out the Mexican restaurant. Much to my relief and their disbelief, they discovered said Mexican restaurant had closed for the afternoon and wouldn’t be opening until later that evening.

Quickly spinning on my heel and walking towards Eat Drink Live Greek, I paused at the little desk that asked patrons to wait to be seated. After being greeted by the friendly woman who worked behind the bar, the group and I found a table in the fabulous sun.

Leaving us with the menu and lunch specials for the day, we sipped on cool, crisp water while the warmth of the sun pelted down upon us. As Kaffy and I went about reading the menu and the wonderful little message about where the seafood and meat were sourced from; Ms. C tendered to Mr. M, who was experiencing a rather nasty case of tonsillitis. 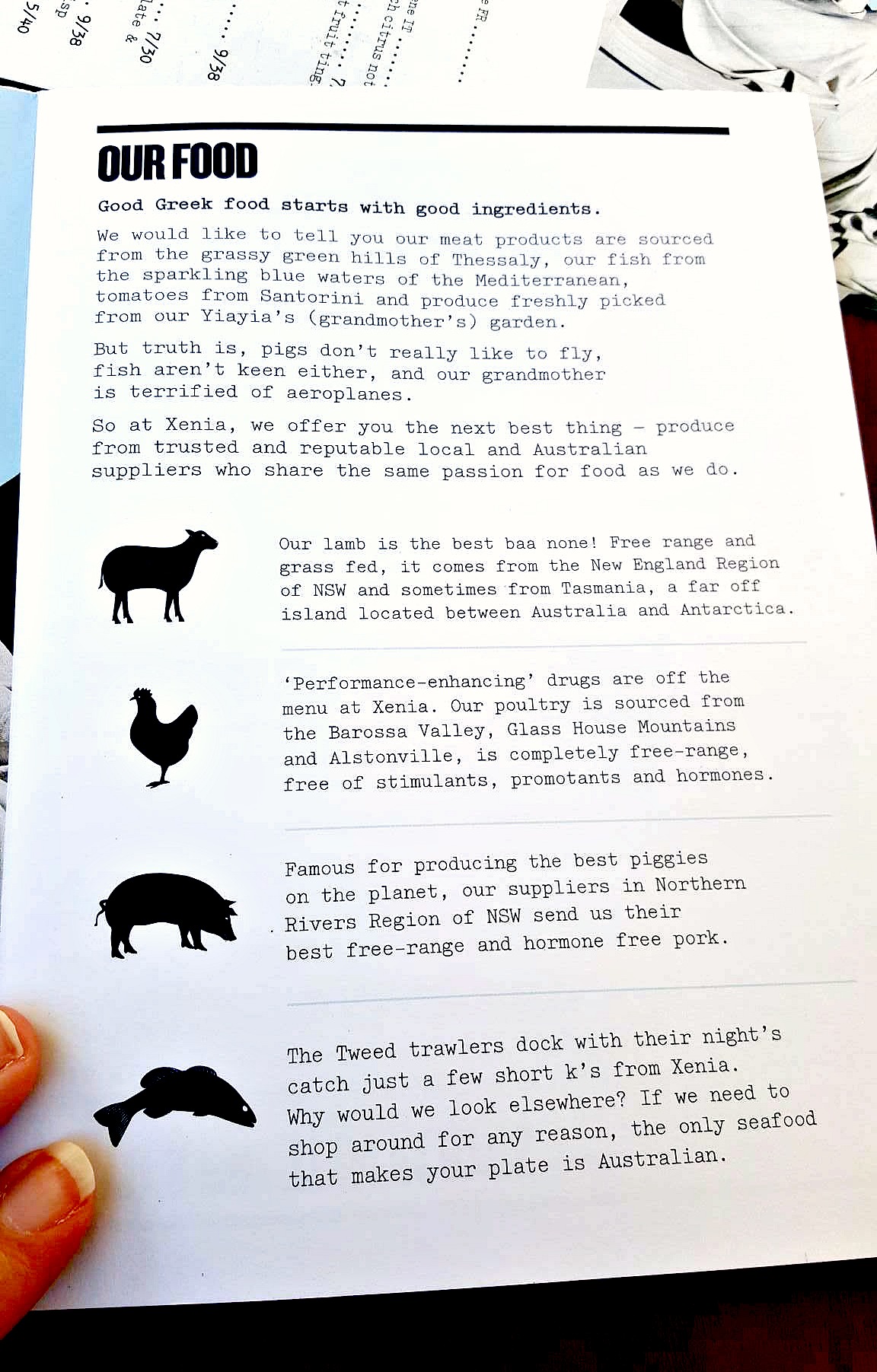 With the question of “what would you like to order?” appearing, Ms. C asked Mr. M what he would like to eat and having being told nothing, us women took control and ordered homemade hummus and freshly baked pita bread. With everyone ordering their tempting dishes, it came time for me to order and it was an entirely different scenario. Battling with wanting to buy everything on the menu, I finally settled on the thing that had drawn me in like a moth to a flame.

Settling in our seats once again with our water as the sun warmed up our chilled bones, the salty air gave way to the smell of cooking seafood. As I glanced out over the busy road of Coolangatta to the grassed area that would lead you to the patrolled beach, I was brought back down to Earth when asked how my studying were going.

Up until that moment and question, I had been living in holiday mode while choosing to ignore the fact I had T-minus 2 days until my final exam for Pharmacology. Glancing over at Ms C who was tenderly stroking Mr. M’s arm, I answered “some days I feel like the information is sinking in but then there are times like today, I find myself questioning as to whether or not I remember 7 weeks of detailed, in depth and precise notes for pharmacology. I’ve got to admit, it’s starting to overwhelm me”.

Before I could say anything else and as if the universe had sensed my true emotions, our wonderful waitress arrived at our table with brunch. 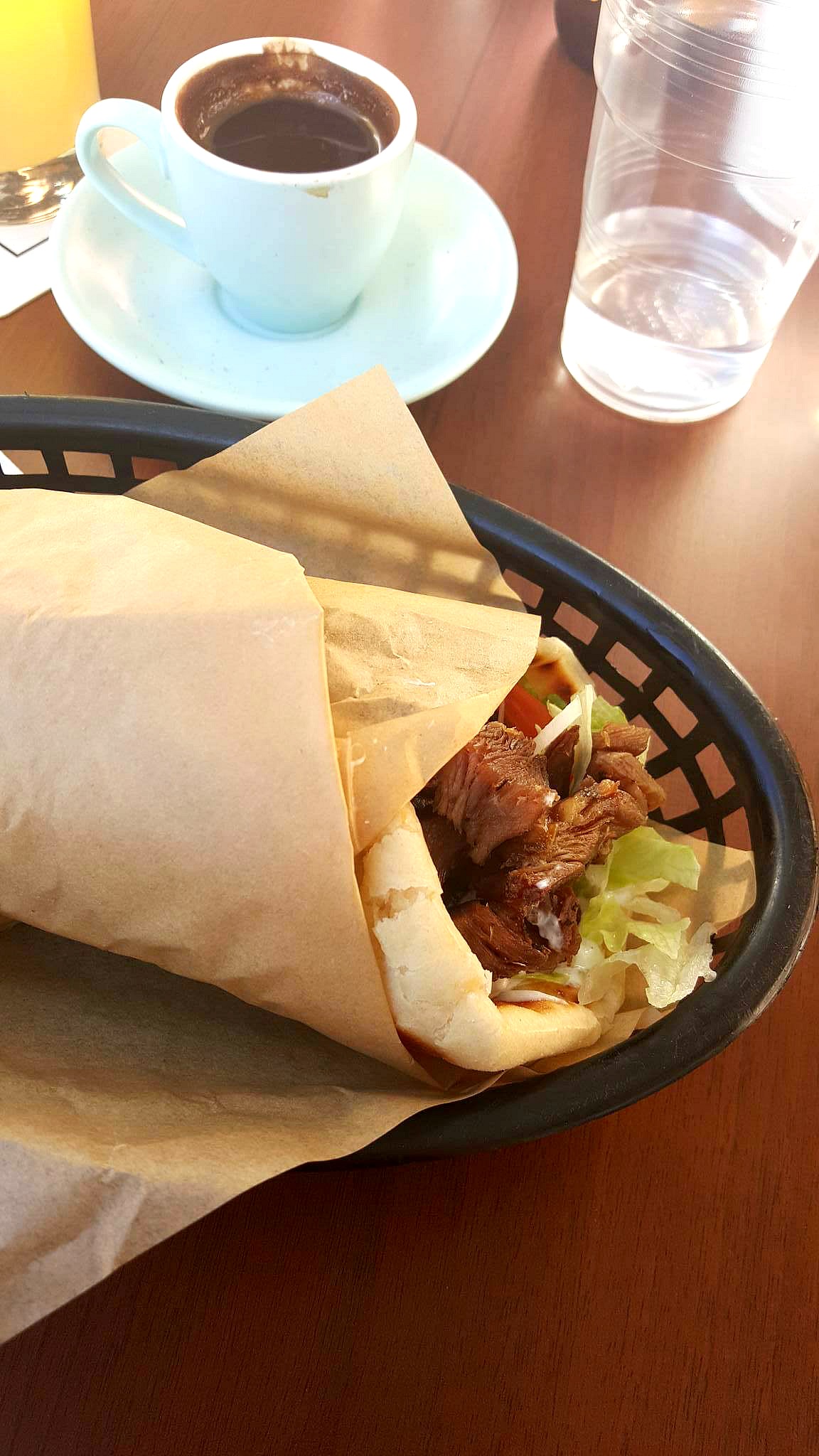 After thanking the waitress for our brunch, I settled in for the adventure of playing musical plates as I went about taking photos for Scarlett O’. All the while Mr. M and Ms. C stared for they’d never seen a blogger in action and as for Kaffy, who no doubt had to endure it countless times, continued on with having a relationship with her brunch.

Satisfied with photos because I really couldn’t care anymore, I no longer denied my temptation and took a bite of my mouth watering slouvaki. My relationship began when the soft pita bread gave way to the crunchy textures of lettuce and char-grilled succulent lamb before coming to a delightful end. As my taste buds were greeted and tingled away with the creamy smoothness of tzatziki which caused little pops of lemon to dance around the palate.

I moaned in content because I had just won the taste bud lottery, a tiny little blue cup was placed off to the side of me. But before I could pick up the little, delicate blue cup as I finished my last mouthful of my ever wonderful slouvaki, our waitress came floating over and asked if there was anything else we would like to try.

Settling on the idea of baklava, we were told the man who made them was late on his delivery as he was travelling from Nimbin. This comment of course sent the waitress, Ms. C and myself glancing one another as we no doubt shared the same thought. Instead of opting for the cheque, we went for the next best thing. 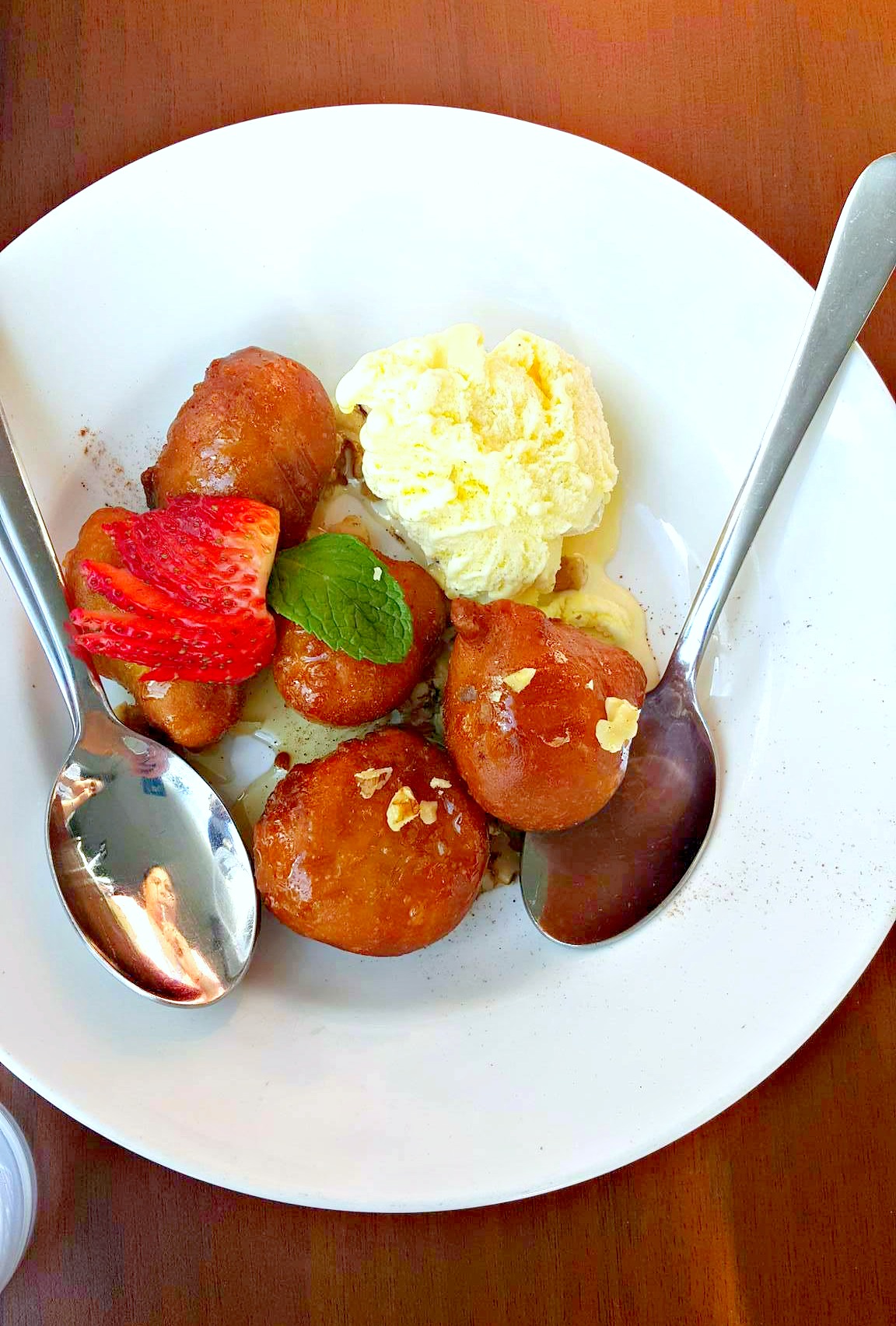 Greek donuts drizzled in succulent honey with a side serving of Yiayia’s coffee.

Playing once again musical plates so I could capture a photo, we settled back with a slither of donut, honey and cream on our spoons and began to discuss the peak and pit of our holiday so far. With the commentary revolving around time being spent with one another and what we considered to be our lowest points, I found myself thinking about the reality of what my exam could bring in the near future.

Although I was sitting at 49.6% and all I needed was one correct answer to pass me well and truly for Pharmacology; I sat in the sun with my blue little cup balancing between my finger tips and pondered about the meaning of what life. It was in this moment I heard a voice whisper next to my ear, “take a sip.”

Experiencing my own Eat, Live, Pray scene minus Julia Roberts, I felt compelled to listen to this little voice that sounded similar to my own and I took a sip. Which was then followed by another and another until I got to the bottom of my cup.

I glanced down towards the bottom of my little blue cup and expected to see a hidden message somewhere between the un-stirred sugar lining the bottom. Looking up from my cup and noticing the concern Ms. C had for Mr. M and the concentration Kaffy had on her face as she answered a question, I discovered what the meaning of life was all about.

Having promised to not kiss and tell as to what the meaning of life is really about Dearest Reader, I can tell you this: there is only so much the universe and Yiayia’s coffee can provide and throw at us in regards to what we should be doing.

If you find yourself with a serious question, need some clarification as to what you are doing or you need some words of wisdom from Yiayia than pop over to Xenia. Where you shall order yourself a lamb or chicken slouvaki to fill your hungry belly and a small delicate blue cup of Greek coffee (with 1 or 2 sugars).

Sip on your coffee as you ponder away your questions, thoughts and clarification for Yiayia will show what the meaning of life and everything else is.