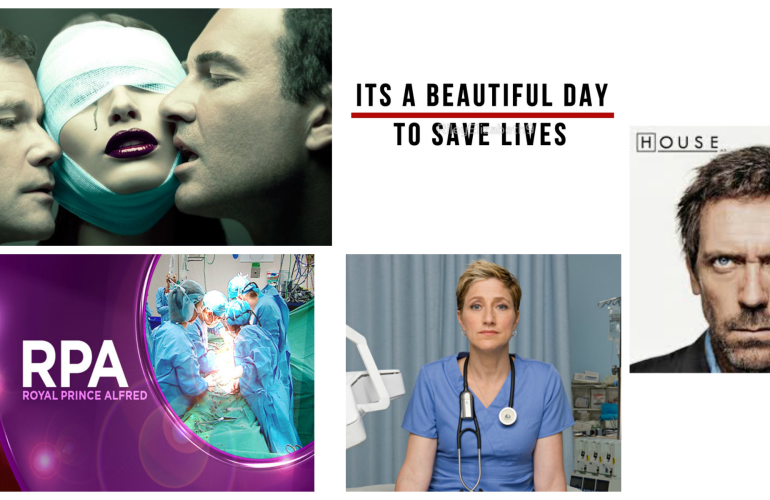 My most spectacular moments of childhood would see my doll, Lucy and I climb to the top of my swing set, prop open my umbrella and jump. Or it would see Lois and I spend our Saturday mornings on the couch in our pyjamas, where we would spend a couple hours watching The Muppets on the Disney channel before flipping the channel and watch the gripping tales of E.R..

Some 20 years from my first episode of E.R., my love for medicine and medical shows have not changed in the slightest bit at all. In fact, it’s one of the many reasons why I studied to become your nurse for the day and with my love of medicine, I’m telling you how 5 medical shows may save your life.

Although the series focuses on Christian Troy and Sean McNamara, Nip/Tuck is a medical television show that can be described as having a cutting edge completely surrounded by controversy with the McNamara/Troy plastic surgery centre. With each episode featuring a rather graphic and partial depictions of various plastic surgeries such as breast augmentation, rhinoplasty or vaginal rejuvenation; Nip/Tuck has taught me a few things.

The things that I’ve learnt are: my family is equally effed up as Troy and McNamara’s co-joined family and for those who haven’t seen the show, it’s a relatively long winded process of having to describe what I mean. And yet, we still manage to make it work like they do. Secondly, if the doctor is good looking and appears to be excellent at his/her work, it doesn’t always mean they are excellent with communication skills or actually seeing you as a fellow human being. Lastly, there may come a time where I will need to slap a sexual harassment onto some dirt bag in the workforce, just like Liz (McNamara and Troy’s scrub nurse).

Hopefully there doesn’t come a time when I need to do something like that but considering sexual harassment happens on a minute to minute basis, we all need to realise that sexual harassment and bad people skills is not acceptable in the work force. Whether you’re in the medical health field or not.

“Its a beautiful day to save lives” – Derek Shepard

We should all know about my love for Cristina Yang, the relationship she had with her missing shoe after four years of blogging and what medical post would really be complete without Grey’s Anatomy? I didn’t think so either.

Overlooking the fact that Shonda is killing off every romance that sets my single heart, yearning while keeping the morons who bear the brunt of me yelling out the tv, “just dump her/him already!”; Grey’s Anatomy focuses on the relationship of a group of doctors at Grey Sloan Memorial Hospital in Seattle. Guaranteed it shows how hard life can be for a intern and fellow doctors, I’m still scratching my head over how these doctors manage to find time to go to the bathroom, eat, have amazing on-call sex while still finding time to perform life altering surgery.

When I can’t find time to go to the bathroom, let alone eat while I’m on placement.

Even though the Twisted Sister no longer exist, Meredith continues to bitch about being on the merry-go round and Jolex frustrates me (seriously, just dump her already!); I still continue returning to Grey’s Anatomy for it brings back the memory of a winter morning many years ago, that saw me surrounded by triage doctors and nurses, performing CPR on my Grandmother.

If it hadn’t been for Meredith Grey, her climbing on top of a patient who’d flat lined and the amount of ‘compressions’ she had administered, my Grandmother wouldn’t be alive today and I wouldn’t have had the first lick of nursing adrenaline. So when it comes to me having to perform CPR on you, it doesn’t matter where the knowledge comes from but how I effectively put that knowledge into practice is what counts.

“No, Zoey. You never remove a foreign object protruding from a patient. A surgeon does that, do you understand?” – Jackie Peyton

When I think of Nurse Jackie and all of things I’ve seen, heard and witnessed as a viewer and liver of nursing, the first thing that springs to mind is Vicodin and Adderall.

Jackie Peyton (Nurse Jackie) is an A&E nurse working in emergency in New York. While attending to and providing her patients with the best care possible, Jackie goes about navigating the rapids of a failing health-care system, an overzealous boss that leaves you wondering why/how she became a nurse and an addiction that sees Jackie reaching for the nearest little packet of crushed up Vicodin or Adderall.

Although some would claim Nurse Jackie as ‘just being a silly little show’, in my mind it brings light to how stressful, tiring and psychologically draining nursing and medicine is. Even though Jackie has never fallen asleep behind the wheel of a stationary car like I have, there are moments shown in the series that I honestly do sit here and question myself as ‘to why I started this?’.

I’ve learnt as a result of Jackie and her pill popping tendencies, nursing has many downs but it has some incredibly uplifting moments as well. Especially when you find a doctor who acknowledges you as a fellow human being and has expensive taste in heels.

“It’s time to put this man onto bypass” – Doctor.

Starting where it all begin with the introduction of medicine, the thought of ‘what if?’ and holding a scalpel and the image of a beating heart in front of my child eyes. RPA was the first series to introduce me to the possible thought of becoming one of those people, dressed in blue and were doing funny things to a person under the blue blanket.

RPA is an Australian reality television show filmed within the walls of Royal Prince Alfred Hospital located in Sydney, Australia. This television show allows for the Australian and international viewer to a grasp a concept of the everyday workings within any major hospital and the journey that is taken undertaken by both the patient and the medical staff involved.

Guaranteed I was 7 at the time of watching a CABG (Coronary Artery Bypass Graft) be performed and the incredible image of this man’s heart stop beating after the doctor stated, “it’s time to put this man onto bypass.” As an adult, I appreciate what RPA has done for my life and for it giving me the opportunity to think about becoming a blue suited person (doctor) or a nurse wearing a funny mask. Without RPA and the true stories of success, I couldn’t possibly imagine who I’d be as a person and what I’d be doing as a job.

As a gangly and tall teenager, my Tuesday evenings would often consist of me recovering from a rough game of netball from the night beforehand and channel surfing between the channels of nine and ten. More times than not, I’d find myself questioning if I wanted to watch a crime scene and deceased body be swabbed for evidence on CSI or the psychological workings of a medical genius.  However, House would win nearly every debate.

The television show works on the concept of how an antisocial, pain medicated-dependent and medical genius, otherwise known as Gregory House, leads a group of diagnostic doctors. Combining the vast backgrounds of each doctor on tow and the medical genius, House himself, they set about diagnosing medical cases that are referred. As viewers, we see, witness and discover what House will do when it comes to solving a puzzling case.

House’s following and rules see him conflicting with his Boss and Dean of Medicine, Lisa Cuddy; due to House ignoring most of the hospital rules and procedures. Apart from clicking with House’s sarcastic attitude towards idiots and stupidity, I love House for the logistical factor of having to use your brain.

It’s one of the many reasons why I continue watching House after it’s long finished. Not only am I inclined to use 15% of brain, as compared to the usual 10% often used, but it’s also a way I gain an understanding to a specific or certain medical condition that I may/may not come across in the future. House has also taught me how to politically go about telling doctors where they are going wrong while still having a job come the end of my shift.

As much as the past four years have seen Florence Nightingale’s name be brought up more times than a dud partner in bed; she doesn’t even register on the radar for me. For if it hadn’t been my introduction to a simple CABG procedure on RPA or seeing Meredith performing CPR; I wouldn’t be able to inform you:

Hello, my name is Scarlett and its a beautiful day to save your life…